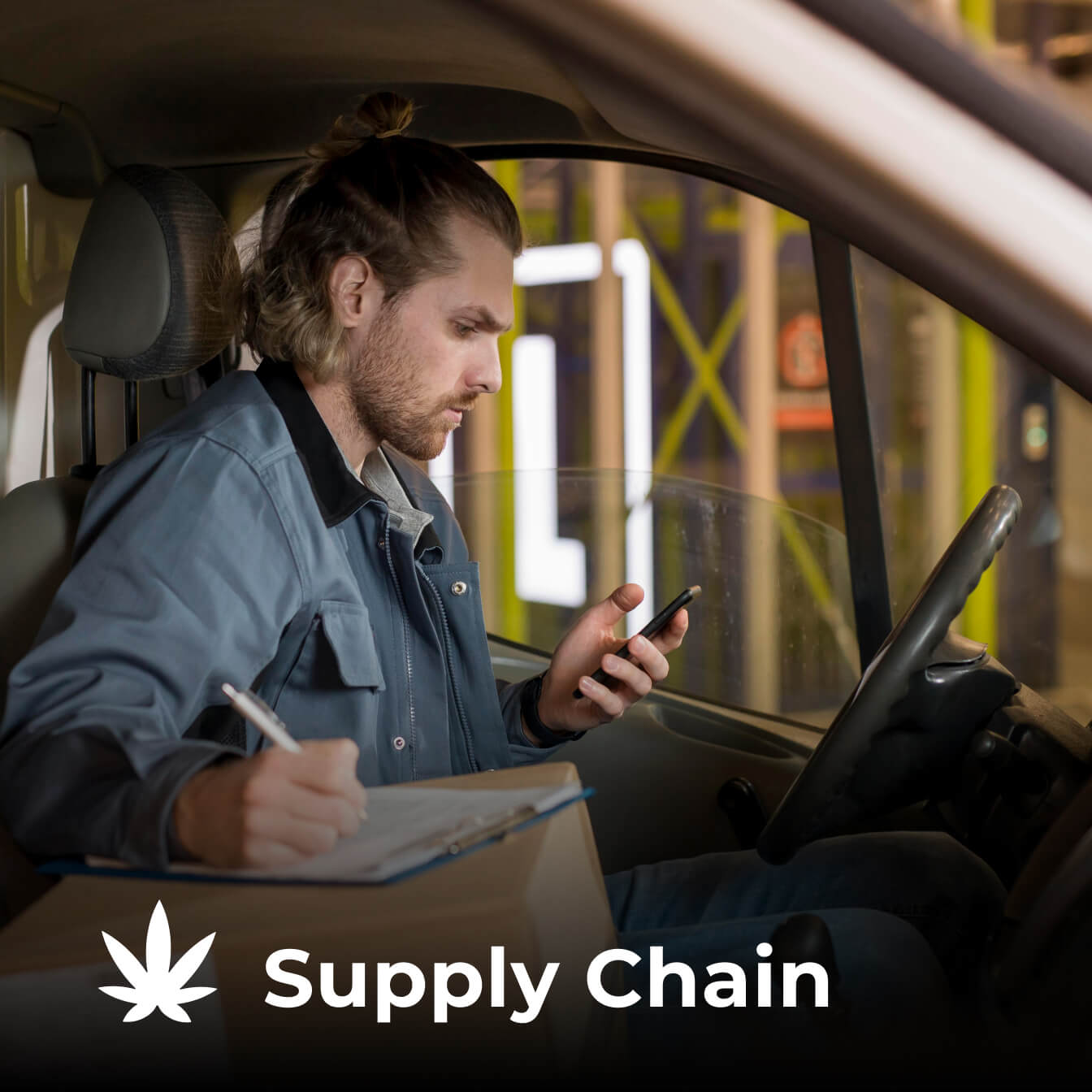 In recent years significantly evolving demand for cannabis and cannabis products worldwide, and across the United States, in particular, led interested business companies to create and develop various marijuana products that have gradually improved and refined. Consumers nowadays have a wide range of cannabis products to choose from.

A whole network of cannabis businesses was formed to develop this industry, which has been sophisticated and developed over the years. The network consists of several stages that ensure to give the cannabis product a finished form and present it to the market to sell.

Therefore, if you get seriously interested in trying your strength in the cannabis business, you should get familiar with all the steps and procedures the mentioned cannabis supply chain considers.

The cannabis supply chain comprises five primary steps: cultivation, manufacturing, testing, distribution, and retail. This article will give you a clear impression of each step.

Excellent attention and strict control apply to the cultivation stage of the cannabis supply chain in the States and Canada. It is a step of initial processing of the hemp material, which includes the extraction of raw hemp leaves and subsequent processing.

Germination – the cannabis plant is germinated, which makes the seed of the plant sprout and the root appear.

Seeding – this is a phase when two embryonic leaves appear from the root pushing away the seed shell in search of light. It requires particular humidity and light as it is the most vulnerable period of the plant life cycle.

Vegetative – at this stage of cultivation, the plant needs a considerable amount of light and nutrition. After 1-2 months, the sex of the plant starts to reveal, which means that time for the next stage has begun.

Pre-flowering – it’s a period of 10-14 days after switching the light cycle to 12 hours of darkness. The flowers start to appear where the branches meet the stem.

Flowering – this period varies from around 6 to 22 weeks, depending on the type of plant. It is the phase of flowering itself. The sex of the plant is now clearly revealed. Female and male plants are separated to avoid pollination.

Harvesting – this process varies depending on what the cannabis plant is used for. Hemp grown for fiber is harvested before flowering, while cannabis for smoking or cannabis products need harvesting when 5-15% of trichome color is reddish or brown. Harvesting also includes drying the harvested plant; the plant is wholly dried for 3-7 days in a dark room with a temperature of 65-70°F and 50% humidity.

Nowadays the specialists predict that the cannabis products that can be extracted will soon diversify since people learn the importance of the potency (active compounds) in marijuana.

More and more scientific institutions are involved in the search on drug discovery and development from cannabis. They have started to study certain compounds in marijuana plants, testing them for potency, toxicity, and medicinal values.

The extraction process removes the active ingredients – cannabinoid and terpene compounds -from the cannabis plant to make a solid, semi-solid, or liquid form of cannabis.

Cannabis extracts include liquid cannabis oil and more solid, dabble extracts like shatter(a highly concentrated cannabis extract made by butane extraction). Most forms of extracts can be vaporized, dabbed, or ingested.

Common solvents -alcohol, hydrocarbons, CO2, water, and ethanol are used in this process.

Non-solvent extraction – is any extraction method without the use of harmful chemicals, solvents, and concentrates. The products made by such extraction methods are popular with medical marijuana users. The solvent-free cannabis products include kief, freeze-dried hash, water hash, bubble hash, hand-rolled hash, solventless shatter, budder, and rosin.

Dry sifting or shaking is a method to produce kief (the tiny glands attached to little hairs called trichomes that cover the cannabis plant. These resin glands are full of cannabinoids and terpenes that make imbibing such a pleasure).

Manufacturers do also take part in packaging bulk flowers into eight jars, turning the flowers and shaking them into pre-rolls, breaking down buds into smalls, tops, mids, and kief.

Cannabis infusion is when some baked good, beverage, or other consumable with distillate is infused. They are known as edibles; such infusions are made to be used in cooking and baking.

The following stage of the cannabis supply chain is testing which includes a series of meticulous examinations. Every state has its regulations regarding testing, though they all ensure the quality and safety meet the standards set forth by the government.

Cannabis products are tested in authorized labs by using various methods for it. Testing the products in labs aims to discover any contamination, pesticides, mold, and mildew. The regulatory bodies have issued a list of banned pesticides that must be absent in the composition of cannabis products.

Cannabis testing consists of two stages. First is conducted before selling the harvest, when batches are assigned ID tags and logged into a state’s cannabis distribution software.

Second, any transformed products modified from the original flower, such as edibles, must undergo another testing post modification using a sample batch. The results will then be attached to a certain batch in the cannabis distribution software.

Like many industries, distribution is one of the crucial parts of the cannabis supply chain in the business. Entrepreneurs can organize distribution by themselves; however, cannabis products today are mainly being distributed via third-party channels around the states. In many partnerships, these third-party distributors test and package products themselves while organizing the distribution that connects growers and producers with retailers.

Those who desire to enter the cannabis business as a third-party distributor must consider that marijuana is governed by strict quality and safety standards and licensing mandates vary by state.

Distributors can operate in several different ways according to a state. They can ship or store products and act as an external sales team for the wholesaler. Their duty may also include collecting payments from retailers and moving money on behalf of the wholesaler.

State regulations oblige cannabis and cannabis product distributors to apply for specific applications to be granted a distributor license. There are two types of distribution license:

Distributor Transport Only – means a State recognized Type 13 licensed entity that conducts the transportation of cannabis products between licensed cultivators, manufacturers, and distributors. They may not transport marijuana goods to retailers except for immature live plants and seeds. A Type 13 licensee may only transport the products that the licensee has manufactured.

Only distributors with a Type 11 License are responsible for transporting cannabis and cannabis products between cultivation, manufacturing, distribution, and retail premises. They will also have to arrange for the testing of cannabis and conduct quality assurance to comply with all packaging and labeling standards under the State. They are eligible to provide storage services to other licensees as well. The distributors under this license type must also ensure the government with tax payments within the appropriate time frame.

Retail is the industry’s most transparent stage of the cannabis supply chain. Retailers purchase unbranded or white-labeled finished marijuana products to sell them in their dispensaries. They often design and buy their proprietary packaging for cannabis products to make their brand and compete in the market. For many dispensaries throughout the states, it is more common to take part in white labeling rather than growing, trimming, drying, and producing their own branded line of marijuana.

There are three main ways of selling cannabis and cannabis products among consumers. The first way is through traditional stores selling the products to consumers in a literal store or dispensary. The second is selling cannabis products through online sellers due to the strong impact of social media and e-commerce platforms. The third way of retail is the mixed stores that have both dispensaries and online stores. Many big companies in the states depend only on online retail.

According to the type of products, retailers go through some regulations set forth by the state government. Medical dispensaries must comply with the strictest ethical and industry standards, while retailers that sell edibles must abide only by specific food and drug regulations for safety and hygiene. Such retailers are, for example, bakeries that produce brownies with cannabis infusion. There are also coffee shops that sell marijuana-infused coffee and drinks.

While the cannabis industry has shown great financial potential, you have considerable challenges if you seek to enter this growing market. But with some planning and good partners, you should be able to not only tackle these challenges but thrive.