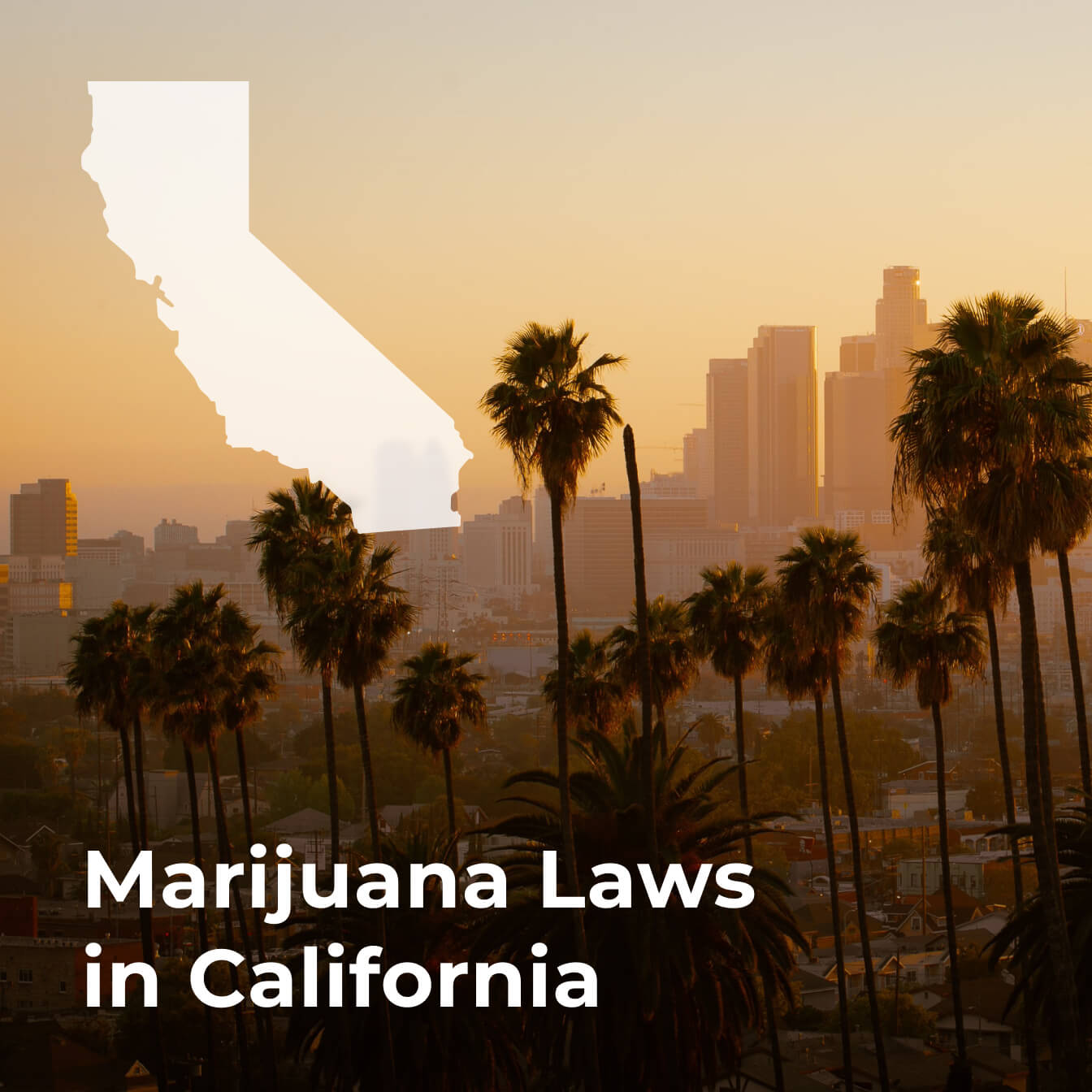 When legislators approved the Compassionate Use Act in 1996, California became the first state to legalize the use of cannabis for medical purposes.

As of November 8, 2016, voters in California adopted Proposition 64, making adult use of cannabis legal. Generally speaking, the legislation permits persons 21 and older to possess, consume, and give away up to one ounce of cannabis privately and grow no more than six plants for personal use at home. Additionally, it permits the state-licensed cultivation, distribution, and commercial sale of cannabis for adult use. Local county and local governments have the authority to limit or outlaw cannabis enterprises inside their borders.

In addition to overseeing cultivation and manufacture under marijuana laws, the Department of Cannabis Control  in California issues licenses and controls retail sales, distribution, and testing. For all state-licensed establishments, prior city or county government consent is necessary.

Who Can Purchase Marijuana in California?

When accessing a marijuana dispensary, you must be at least 21 years old and provide a valid ID, such as a driver’s license or passport. Patients must be at least 18 to possess a doctor-issued medicinal marijuana card. To purchase cannabis goods in California, you must visit and shop at a licensed dispensary.

You must be 21 and older to possess up to one (1)  ounce of dried marijuana or eight (8) grams of concentrated cannabis under California marijuana laws.You may also grow up to six (6) plants for personal use, subject to certain restrictions.

If you exceed these recreational cannabis limits, you may be charged with a misdemeanor and punished by up to 6 months in county jail or a fine of up to $500.

Underage possession of marijuana may result in an infringement, a fine (if the offender is at least 18), or drug therapy and community service (if under 18).

Where Can I Use or Possess Marijuana in California?

Cannabis is legal to consume on private property but illegal in public places like pubs and restaurants in California. You may not smoke marijuana in places where it is prohibited to smoke tobacco or within a 1,000-foot radius of a school, childcare facility, or youth center where children are present.

On privately held land, property owners may forbid marijuana use. Federal law still prohibits the use and possession of cannabis; therefore, it is prohibited to transport cannabis over state boundaries or consume it on federal properties like national parks.

Sale and Distribution of Marijuana in California

In California, selling marijuana or having it with the intent to sell remains illegal unless you get a license from both the state and your local jurisdiction.

We also want to remind you that when applying for a license you are required to indicate a point of sale (POS) system you will implement in your store. Due to the complexities and challenges associated with starting a dispensary in California, a POS system is the tool that is tailored for your dispensary and streamlines your processes.

IndicaOnline is an all-in-one software solution and is committed to support your cannabis dispensaries with all the necessary tools, to help you automate all your business activities and be compliant with California marijuana laws at the same time.

According to current state regulations, Californians 21 years old and older may grow up to six cannabis plants in a single private household. Couples and housemates are thus only allowed a total of six marijuana plants, not one each.

Residents who want to grow marijuana in California must also adhere to local marijuana laws. Counties and towns may each have their own unique regulations regarding marijuana growth. In general, individuals can grow marijuana:

Californians under 21 who grow more than six cannabis plants in a private residence are breaking the law and might face penalties for marijuana growing. If someone violates a local ordinance, they may also be subject to fines and other penalties.

Driving marijuana in your car is legal in California as long as it is still in its unopened packaging. However, cannabis products that have been opened or are no longer sealed should be kept safely in your trunk, much like a bottle of wine that hasn’t been corked. A closed glove box or other “safe area” would also be suitable if you don’t have a trunk.

In either case, if you are traveling with marijuana around California, be sure that neither you nor your companions can easily reach the stashed container.

What are the Medical Marijuana Laws in California?

Since California was the first state in the US to legalize medicinal marijuana, a lot has changed in its regulations from 1996, including who can become a patient and how.

How Can Patients Get Medical Marijuana Recommendations in California?

In California Marijuana is not something doctors “prescribe.” The prescription of Schedule I drugs, including marijuana, is particularly forbidden by federal law. Doctors may instead “recommend” marijuana for specific conditions. In accordance with Proposition 215, patients who suffer from “cancer, anorexia, AIDS, chronic pain, spasticity, glaucoma, arthritis, migraine, or any other condition for which marijuana gives treatment” are included. Many additional medical conditions, including insomnia, depression, anxiety, PTSD, and many more, have received marijuana recommendations from doctors.

The “Medicinal and Adult-Use Cannabis Regulation and Safety Act” (also known as “MAUCRSA”) was approved by the legislature after Proposition 64 made marijuana use for recreational purposes legal in California. These marijuana laws integrated the medical and recreational marijuana regulatory systems.

Individual patients in California are often unaffected by these regulations as long as they only grow for their own medicinal needs and keep their growing space to 100 square feet. Primary caregivers are free from the new regulations and may cultivate up to 500 square feet for the personal medicinal use of up to five patients.

There is a whole set of regulations when it comes to cannabis advertising in California.

Advertising is limited to target audiences 21 and older. Under the California marijuana laws in California, cannabis ads are only allowed where at least 72 percent of the audience is expected to be over 21. This rule covers print, radio, broadcast, cable, and digital communications ads. Direct, individualized dialogue or communication must use some type of age verification method. Companies are also restricted in releasing marketing approaches that might be attractive to kids.

False and deceptive claims are against the marijuana laws. Advertisers are not allowed to make statements that are not supported by the truth. Businesses are prohibited from making false or unsubstantiated claims regarding the health advantages of their marijuana products.

Giveaways are not permitted by law in California. Cannabis businesses are prohibited from giving away goods or accessories as part of marketing. Donating marijuana to a patient who benefits from medicinal marijuana is the sole exception.

Child-resistant packaging has been one of the key focuses of California cannabis regulation since the state legalized marijuana in 2016. Your company must sell marijuana in packaging that is challenging for children under five to open in a lab setting.

Whether your marijuana business sells edibles, concentrates, or any type of cannabis flower, the packaging must be tamper-evident (packaging that makes any interference with the contents obvious) so that customers can tell if the container has been opened. Packaging for produced cannabis products must be tamper-evident, child-resistant, and verified by third parties accepted by the Department of Cannabis Control in order to safeguard them from contamination and detrimental exposure to hazardous chemicals. Tamper-evident packaging is essential for being compliant in California and avoiding penalties like astronomical fines.

In California, it is insufficient to merely have high-quality cannabis packaging that is tamper and child-resistant. Cannabis labels fall within the main and information panels categories in California.

The most important information must be shown plainly on the top or front of the box, with the principal panel visible, for cannabis labels to comply.

Packaging for cannabis products in California cannot be made to appeal to children, and all prints must be legible and clear under California marijuana laws. Labels must be printed in 6pt. Font and be visible on the cannabis packaging’s outer layer.

According to the California Department of Public Health, county names cannot be used on the package unless the items were entirely grown there. Product images, false information, and unsubstantiated health claims are strictly forbidden.

It’s essential to ensure your business complies with California marijuana laws as the new year gets underway, as marijuana laws may change quickly. Every product that marijuana firms provide, whether they are flowers, concentrates, or edibles, have specific rules that must be followed to avoid harsh fines. However, if you are using our POS software, you don’t need to keep up with the restrictions. We do the job for you, and all you gotta do is keep building strong relationships with your customers.